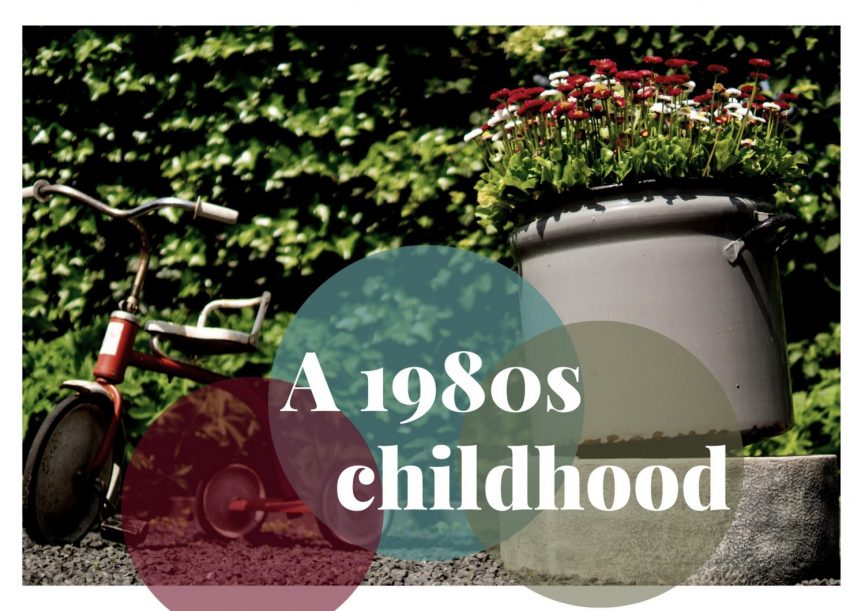 Regular readers will know that, ever so occasionally, my husband Jacob guest posts on my site. As we sit and look back over the year of 2020, what we achieved, what we’re grateful for, it got us to thinking about our own childhood.

We are both children of the 1980s. A time before the internet, when making a call from a phone box might include having to queue up, and snap bands were about the coolest thing going at school.

As always, though, Jacob has a great way of retelling his memories, so he is guest featuring today with 5 things that he thinks were better in our youth:

Many things we do have both negatives and positives. Work being one of them – I love getting stuff done and the social aspect of work, however I’d prefer to spend more time with my family and have at least one duvet day a week. Looking back on my childhood, I feel exactly the same about…

As a young child, you don’t even question why you go to school. It just is and always has been. You go there, play a bit, act the clown – occasionally do a bit of work. As you get older the work portion expands and the play diminishes. However, the network and love of your friends never dies. Who gets up early to go to work just so they can see their friends? Not many people. But for school I’d get up extra early so we could dawdle along the path to school, tucking into a sticky bread pudding from the shop on the way. The structure of the weeks and days gave you a wonderful predictability to your life, with no surprises and plenty of time to pause and have fun.

The cliché of school dinners is of muck being slopped on a plate, but way before Jamie Oliver came along, the school dinners of my youth were legendary. In fact, my childhood diet has probably unduly influenced my taste buds to this day. For the general health of children, I am grateful that theirs will be different. At primary school I loved all of the milk puddings – tapioca, rice pudding and semolina all feature heavily in my memory. The main staple of our secondary school dinners was chips. Chips with anything else that could be fried or baked. Sausage roll and chips, pasty and chips, burger and chips, fish and chips. I do vaguely remember seeing a vegetable tray sitting under the hot lights, but I think it was just for show. Once you’d done with your fat and carbohydrate injection, you’d move on to the sugar motherlode. My top favourite was crackling, half-sphere, hedgehog like chocolate and golden syrup impregnated mounds of cornflakes. Chewy and crunch and the same time it would coat your teeth and keep you going until the inevitable sugar crash at 2:30 when you’d groggily slump in your seat.

I don’t particularly remember feeling tired. In my younger years I would race around with the speed of Taz. By the time I was at secondary school, I used to be able to go to sleep at 4am and still happily get up at 6am to get the train for my holiday job. I can’t even imagine staying up until 2am on a school night then traipsing in the next day – but we did it every Thursday night. That level of energy is firmly in my past now!

I used to read and read and read. The phrase is that children’s brains are like sponges, I don’t think that’s descriptive enough – they are more like black holes. You can chuck books, museums, documentaries, travelling in and it just sucks it up. Everything you read is new, you’re not cynical to the outside world and you haven’t created the filter of “that’s not a thing that interests me”. You read, just because why wouldn’t you? The content fills your brain so quickly you don’t always think about it as it goes in. But go in it does as it comes back out at you in wild dreams. Spiders made of working motor bike parts, tectonic plates spitting out new mountains.

Everyone should play when they can, it stops you thinking about things that aren’t really important and gives you time to create something just for the sheer enjoyment of doing so. The great thing about having kids as that I’ve got an excuse to have a shed load of Lego and Brio around the house again. In my childhood I could spend hours and hours constructing replica train stations from Lego and creating intricate train tracks that weaved between the furniture. We’d sellotape together sheets of paper and draw roads all over the floor.

A whole day could be spent making “whiffs” too – noxious substances, the aim of which was to make the stinkiest liquid possible with ingredients from the garden or whatever you could find in the kitchen. Looking back this might have been influenced by the 1980s classic, George’s Marvellous Medicine.

Thank you for sharing this Jacob! If you enjoyed this post, check out Jacob’s personal favourite children’s TV shows.

Are you a fellow child of the 1980s? Or a time before technology was so integral to life? I’d love to hear about your childhood memories!