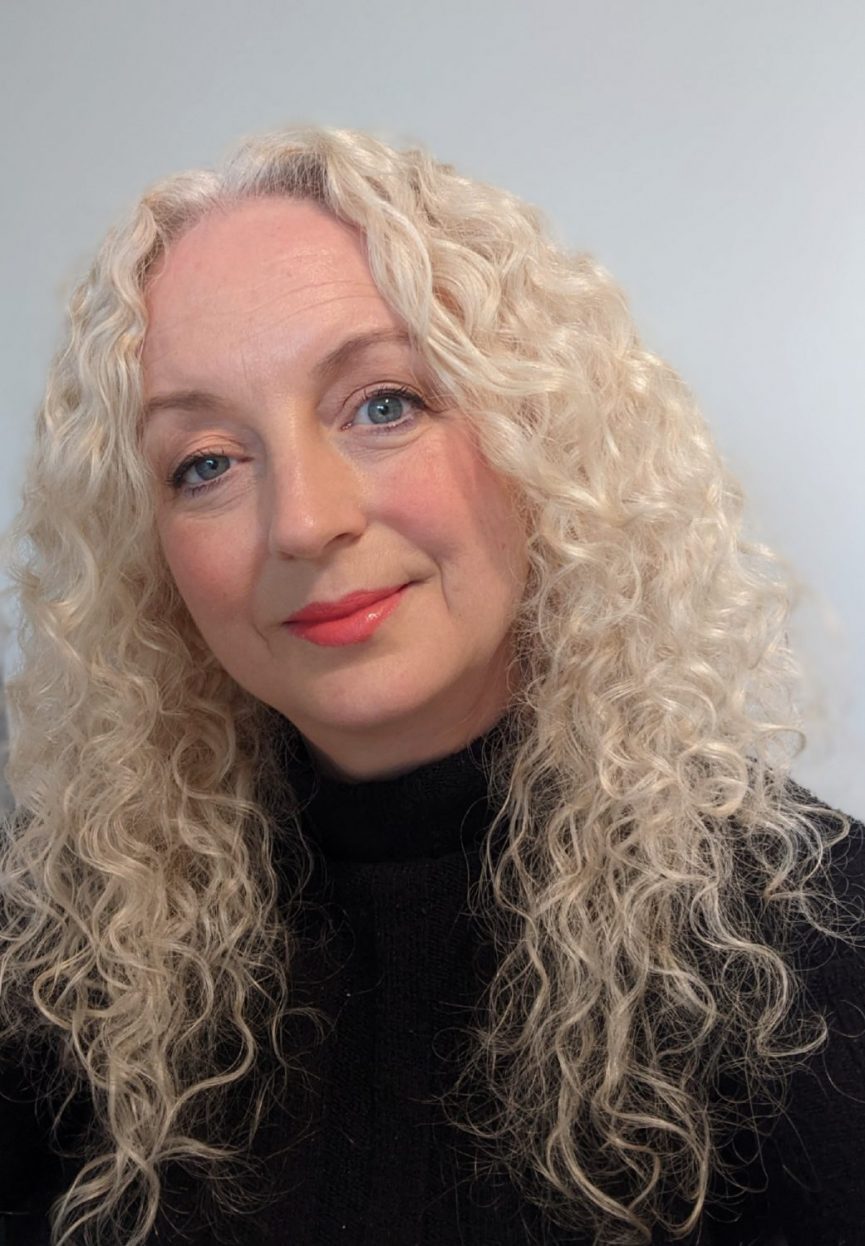 To celebrate the release of the final instalment in the gripping Dystopian trilogy, Rejuvenation by Byddi Lee, today I am talking with the author and finding out more about her writing.

Hi Byddi, thank you for joining me today. I’m delighted to introduce you and your work to my Cup of Toast audience!

Thanks for having me. I’m thrilled to be here.

First of all, I’d love to know what drew you to writing?

Even when I was very young, I was into writing stories and plays. I’d try to get my family and friends to act in the plays.  Later in life, I was journaling my travels, and people who read those accounts encouraged me to write. I started writing my first book, March to November (a standalone women’s fiction) in the evenings, and when I moved abroad, I began working on it fulltime. At the same time, I had a short story accepted for publication which gave me the confidence to keep going.

You grew up in Armagh, and have moved between countries and cities before settling back in Northern Ireland. How did this experience of travel influence your work?

I’ve enjoyed using the various places where I have lived and travelled to stage my stories. Everywhere has ‘flavour’ which bleeds into the text of the story to some degree. In Rejuvenation, I have played with each place and warped it a little. For example, I’ve made Ireland warmer, still damp, but it’s now more tropical. In Rejuvenation Book 2, California is extremely hot and dry, even more than it is now and I amped up how geologically unstable it is. Paris is permanently flooded, but the people have persevered and managed to keep their city beautiful.

To some extent, a place is a character in a story too, and I’ve tried to play with that.

Your Rejuvenation Trilogy is widely applauded. Set in a dystopian future, that sounds quite terrifying, you cover environmental factors and potential biological warfare. What research did you do whilst writing this series, and did anything in particular inspire you to join up those various elements?

I think the two are almost inseparable. By abusing our environment, we are inflicting biological warfare upon ourselves. The poorest of the poor will be the first to suffer, but it won’t take long for even the wealthy to experience hardship. My degree is in Environmental Biology, and I taught Advanced Level Biology for fifteen years, so the biology research was relatively easy.  My husband is a techy, and I was living in Silicon Valley, California while I was writing Book 1, so I had access to amazingly visionary people who helped me figure out the ‘futuristic’ technology in the book. I was lucky to have friends and relatives who were healthcare professionals, and they were very generous with their time and advice on the medical matters the book addresses.

Research comprised of lots of Google searches, many emails with lists of questions and cosy chats over coffee.

Your characters are described in book reviews as being “strong” and “feisty”. Where did you get your inspiration for creating them?

My characters are always mosaics of people I know and/or aspire to be/avoid!   But I think I tend to begin by looking at the best and the worst traits in each character (hero or villain)and try to determine where that combination will lead them. What happens if I distil one quality, make it more pronounced, rub it against another trait in someone else and see where the sparks fly.

When it comes down to it, each character is a mixture of motivations tempered by emotions!

What did you enjoy most about writing these books?

I loved the freedom to invent technology in the futuristic setting I had created. Because I was working in a world that doesn’t yet exist, I felt I could ‘play god’ with it more than a book with a contemporary setting.

And I loved my characters; Granny was so naughty, Jimmy and Joy were so geeky and revelled in their nerdiness. I particularly enjoyed threading the Irish legends dealing with ageing and the land of eternal youth through the story too.

What is your writing process?

I’ll do a rough plot and know the broad strokes of where I want the story to go then I concentrate on character, leaving the plot flexible enough to accommodate what is true to the characters as they develop. I’ll write the first draft quickly and ‘brain dump’ it then rewrite, submit to my trusty critiquing group and rewrite again, possible up to another three or four times. I often joke about not being a writer, but instead, I’m a ‘rewriter’.

How do you hope your readers will feel when they finish Rejuvenation?

I hope they read the last page and sigh! I hope they feel emotionally exhausted, but satisfied that the story has reached a believable conclusion. I hope they miss the characters when they are finished. And it’s a little cruel, but I hope they have a ‘book hangover’!

You’ve written novels and plays, including the recent Zoomeo and Juliet that was performed online during lockdown.  Can you tell me a little about what inspires your next project, and how do you choose the genre?

I’m hopeless at sticking to one genre. It’s all about the story with me regardless of what type of story it is, so it’s often hard for me to explicitly define my genre. My next project was inspired by the first ‘proper’ job I had after university. I used to work in the Dendrochronology lab at Queen’s University Belfast. I measured the widths of oak tree rings for a chronology that goes back 7000 years. Because the trees are sensitive to climate changes, we can see there have been several ‘event’s’ where, for a series of years, growth of the oaks almost stopped. This may be because of volcanic activity or comet strikes that threw dust into the atmosphere. I have focused on one such incident where the downturn in the weather lasted for nine years plunging the country into famine, and plague that wiped out its population.

The story has two timelines – the BC event (Before Christ not Before Covid!) and a modern timeline that explores how story is carried by different means and in this case by the trees as well.

I’ll be doing lots of research on archaeology and life in Ireland in neolithic times for that story. It feels like a rather steep mountain to climb right now, but the only way is up!

And finally, do you have any advice for aspiring authors?

Keep reading, keep writing, keep rewriting. Let go of your ego but still believe in yourself. Listen to any advice that is offered but know that you don’t have to take it.

Thank you so much for taking the time to answer my questions Byddi!

About Rejuvenation, by Byddi Lee:

The Melter War has left the Earth’s surface devastated, leaving humanity to survive on what little land is left between the Scorch Zones and the rising oceans, where towering scubscrapers dot the dystopian shorelines.

Bobbie Chan is a doctor caring for the ultra-elderly in one such subscraper when she notices a mysterious, new disease afflicting her patients; some show signs of age reversal before a catastrophic, and often fatal, cardiac arrest strikes.

Bobbie begins to wonder if she is witnessing a bio weapon in full force. A Melter attack? Are they destined to finish the war they started?

Byddi Lee grew up in Armagh and moved to Belfast to study at Queen’s University. She has since lived in South Africa, Canada, California and Paris before returning to live in her hometown, Armagh.

Her Rejuvenation Trilogy, is published by Castrum Press and Rejuvenation Book One, Book Two and Book Three all available now. Book One is also out in audiobook.

She has published flash fiction, short stories and, in 2014, her novel, March to November.  Byddi has also co-written the play IMPACT – Armagh’s Train Disaster with Malachi Kelly and Tim Hanna. IMPACT was directed by Margey Quinn and staged by the Armagh Theatre Group in the Abbey Lane Theatre June 2019.

During the COVID 19 pandemic when all theatres were closed, Byddi teamed up with Malachi and Tim to write Zoomeo & Juliet and Social Bubble Toil & Trouble suitable for live performance delivered through Zoom, produced by Margery Quinn and performed by the Armagh Theatre Group.

N.B. Thank you to Shannon of R & R Book Tours for arranging this interview, and of course to Byddi Lee for joining me on the blog today.

For more information about how I work with others, please see my disclosure page.

2 Comments on “An Interview with Byddi Lee”