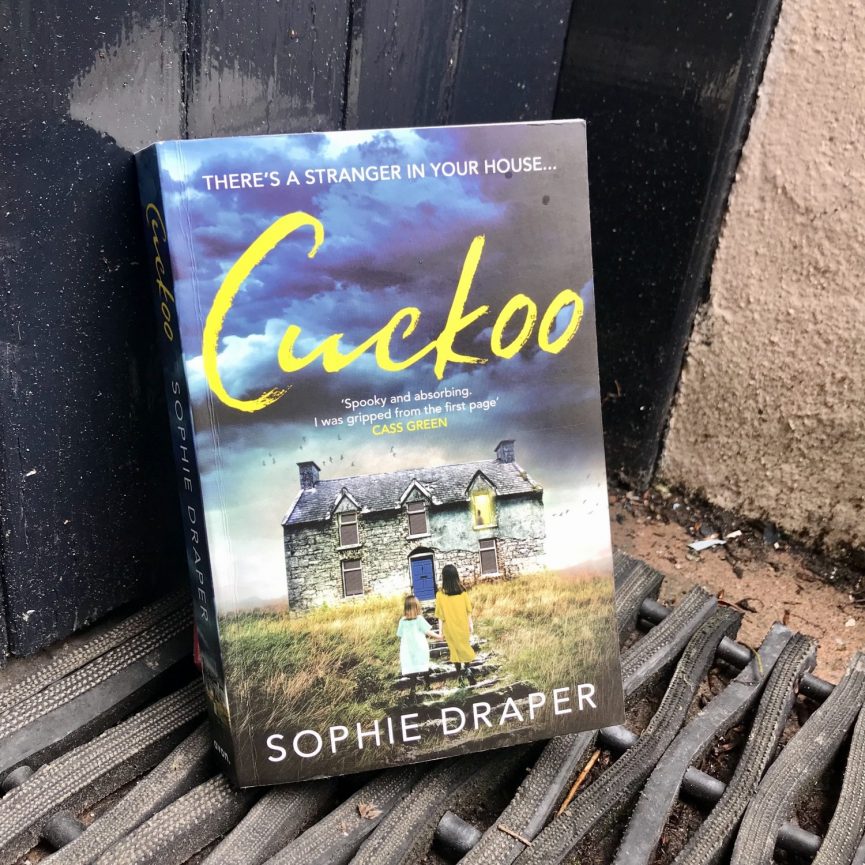 “When her stepmother dies unexpectedly, Caro returns to her childhood home in Derbyshire. Although she hadn’t seen Elizabeth in years, the remote farmhouse offers refuge from a bad relationship, and a chance to start again.

But going through Elizabeth’s belongings unearths memories Caro would rather stay buried. In particular, a story her stepmother would taunt her with, about two little girls and the terrible thing they do.

As heavy snow traps Caro in the village, where her neighbours stare and whisper, she is forced to question why Elizabeth hated her so much, and what she was hiding. But does Caro really want to uncover the truth?”

The story starts with the funeral of Elizabeth. We follow Caro as she returns to her family home to sort her late stepmother’s affairs, uncovering more than she expected as memories are revived and she tries to make sense of the feelings that they bring with them. With hair raising depth we make discoveries and reach conclusions alongside her.

Draper’s writing is exquisite and draws you in from the outset. Breathing life into the Derbyshire countryside and villages through her words, Draper neatly stacks experience and stereotypes next to each other as she builds the scene and the characters.

This superb narrative draws on the depths of human nature and emotion, challenging us all to face childhood memories head on and shaking our impressions of others. The plot keeps you anticipating and guessing until after the last lines are read. Small details scattered throughout are expertly drawn together in the thrilling conclusion.

Complex, engaging and beautifully underpinned by a dark nursery tale throughout, I couldn’t put this book down.

Sophie has kindly allowed me to reproduce her biography from her website. She also has a second book – Magpie – which was published in November 2019. It has gone on my reading list for this year!

“Sophie was brought up in Leicester and Scotland. Following an MA in Medieval History at St Andrews University, she qualified as a Chartered Accountant and had a busy career in London and the East Midlands working in international finance. In that time she met her husband and settled in Derby. She then took a career break to have a family. Three boys followed and she went back to work part-time whilst caring for her children and developing her interest in writing and storytelling.

Sophie trained as a traditional oral storyteller. She “tells” and performs stories now (under the name Sophie Snell) for all ages – fairy tales, folk tales, myths and legends. She sings a little too (not that she’d claim to sing well, but it works with the stories…). It’s a life she adores, entertaining all ages and travelling around to some amazing venues. In 2013, Sophie was nominated for the British Awards for Storytelling Excellence as Outstanding Female Storyteller. You can find out more about her work as a storyteller on her website www.sophiesnell.co.uk.“Writing novels was something I’d hoped to do all my life, but for a while life kind of got in the way. Until the storytelling brought me back to my love of written words as well as spoken. After a few stops and starts, I got stuck in to what has now become Cuckoo.”

Cuckoo is a gothic psychological thriller. It won Sophie the Bath Novel Award 2017 and also the York Festival of Writing Friday Night Live Award 2017. Cuckoo was published by Avon at Harper Collins on 29th November 2018. It was selected as a Fern Britton Pick in conjunction with Tesco’s, and reached the No 1 spot on the Bookseller’s Heatseekers chart. Cuckoo is currently available in all the usual high street bookstores, as well as online.

Her second book, Magpie, is a domestic suspense / mystery, also set in Derbyshire. It was released on 28th November 2019. After its first three days on sale, it went straight to the No 1 spot on the Bookseller’s Heatseekers chart, and by its first full week of sales also hit the No 10 spot in the Bookseller’s Mass Market Fiction chart and No 11 in the Sunday Times Paperback Fiction chart.

Sophie lives with her family in rural Derbyshire, in a house filled with books, music, and steaming piles of sports kit (think three teenage sons). They also have a menagerie of various animals. She still works as an oral storyteller, and is also currently working on her third novel.”

“Apart from work, I enjoy gardening, painting and making jam – there is a sense of peace in sitting at a window in the kitchen, prepping fruit and admiring the hillside views. It’s a good way to ponder twisty stories. I’m also part of an amazing writer’s group we call #Doomsbury and meeting up for food and chat is always a pleasure.”

N.B. I have not received anything in exchange for this review. All thoughts are my own. Thank you to Sophie Draper for permitting me to use her biography. For more information about my reviews, please take a look at my disclosure page.