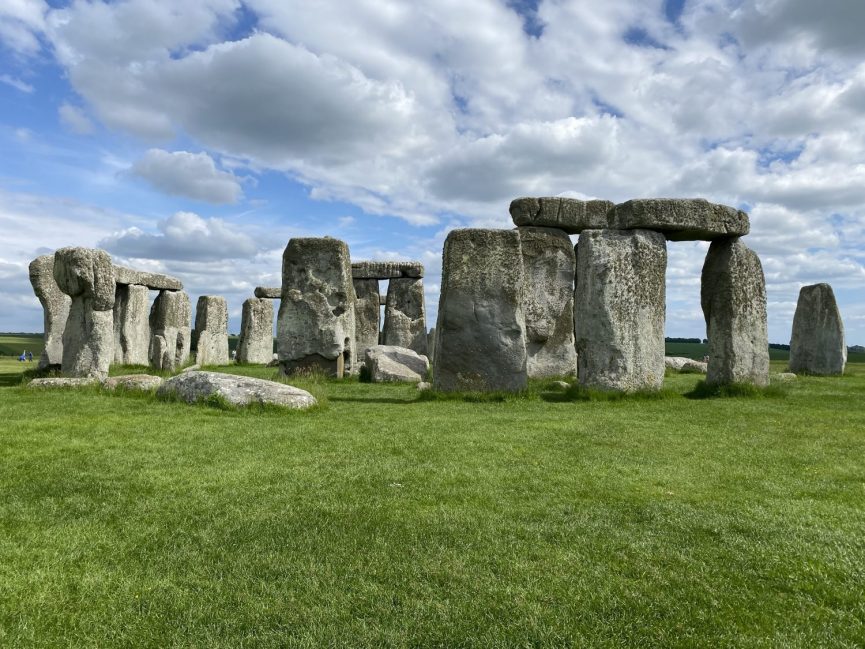 This summer we visited Stonehenge. As a family we all take an interest in history, especially cultural history, so when we knew that we would be in the area it became a must see for us all. I have been once before, but Jacob and our boys hadn’t. It seemed a great opportunity to consider the complex past of the British Isles, especially thinking about who lived here centuries ago and what the structure left behind might mean – or not!

What is the story of Stonehenge?

Stonehenge wasn’t all built at the same time. It comes as somewhat of a surprise to learn that instead it was thought to be gradually built across 1,000 years, some 5,000 years ago. This incredible monument was created by prehistoric people in the Bronze Age, and arranged carefully in the circle that remains today. It’s thought that these stones travelled over 100 miles to Stonehenge, some came from as far as South West Wales. This would have been a huge undertaking, arranging and making strong ropes, choosing the stones, finding a method of suitable transport and feeding and supporting the people who moved them. In these ancient tribal systems there is no sense of there having been a hierarchy, so it is likely that many people would have been equally involved in the process.

Today, nobody is entirely sure why Stonehenge was built. No handy notes or cave pictures that we know about remain to tell the precise tale. Instead we look to archaeologists, who believe that it was a place of sanctuary, created using stones that held healing powers. These include the bluestones which would have been volcanic stone (volcanoes already having been extinct in the UK for several million years at this point in time, but leaving these volcanic rocks behind).

Whilst it is a circle, there are variations in how it was constructed. There appears to be a ‘back’ which is surprising for a circular monument. It is thought that there was therefore a preferred direction of approach, which was more carefully arranged and displayed. Some archaeologists even think that stones from the ‘back’ may have been removed for early roads and farm buildings, then replaced at a later date.

Also on the site is evidence of it being used as a cremation cemetery. There are very few of these across the UK, which raises the question of whether Stonehenge was used as an ritual site for important people, especially once a societal hierarchy began to take shape.

What is the use of Stonehenge today?

Today Stonehenge is looked after by English Heritage as a tourist site, and attracts in the region of 1 million visitors a year. Whilst it is understandably altered by 4,000 years of weathering and decay, it remains an important place to preserve and understand the history of the land and area, providing that link to prehistoric people too.

The experience doesn’t start and end with the stones. At the visitor centre you can see reconstructed Neolithic houses, and visit an exhibition to learn about how people lived, died and discover some of the tools that they used in everyday life.

What is the connection between Stonehenge and the solstices?

Along with regular visitors, attracted by the magnificence of the site, Stonehenge becomes a meeting place at key dates during the year, such as the summer and winter solstices. The sun shines onto the heart of Stonehenge on summer solstice, and sets behind the Trilithon (a name taken from the Greek for 3 stones) on winter solstice, making it a perfect place to honour our connection to the natural world.

Why is Stonehenge considered a wonder?

A unique prehistoric temple, Stonehenge is the only stone circle in the world to have lintels. Whilst it is not officially listed as one of the wonders of the world, the importance of this structure, and what it is able to help us learn about people in the Bronze Age, should not be dismissed. Far from being simply standing stones in a circle, it is architecturally sophisticated. The entire enterprise would no doubt have been a massive undertaking for those involved in its creation.

If you’ve visited Stonehenge I’d love to hear what you thought about it! Get involved in the comments below.