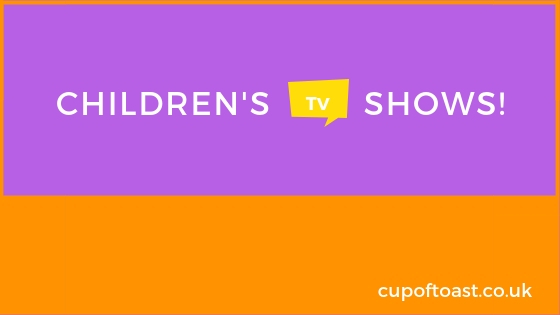 From time to time I have guest posts on my blog, and today I am delighted to share my husband’s favourite children’s television programmes with you. As children of the 80s Jacob and I have shared memories (and a shared love!) of these shows. Do you remember them too?

We’re in the Golden age of adults TV, but I’m not so sure about kids. The wonder of the 80s and 90s is that you were restricted to just 4 channels (then 5 if you could get it). You didn’t filter out things you might not like, you’d watch whatever the programmers thought you might like and they were usually right. No point trying to tape anything, the fight with the video recorder was not worth it. Running into the house at 3:30pm was the best way – live.

I can happily hum this one if not quite remember the words. I’m not really quite sure what it was about, but there were people living on a street with pigeons. There was a lady called Long Distance Clara who drove a truck and I think had her own song. The pigeons would occasionally coo, look at the camera and then at each other. It was the TV equivalent of a nice hot water bottle.

I can’t imagine the initial proposal for this: “Ok, let me just take you through the characters: 1) A blue ghostly thing in the woods”. Ok yep, sounds intriguing, do go on. “A cockney orange caterpillar.” Er, why cockney? “Bear with me on this – a pink fairy”. Mmm, hmm. “And an evil television called Evil Edna – and I want Kenneth Williams to play everyone”. Right. It worked though, I’m not sure how.

This show is timeless, you can watch them all on Amazon Prime today and it could have been made yesterday. Blue, rotund, ambling Berk and his side-kick Boney. Leaving the trapdoor open with strange creatures making their way out with always creative and amusing results. Him upstairs making his unreasonable demands. Half the running time seemed to be given over the opening and closing credits, but the songs were great so it didn’t really matter.

I had to check the internet to make sure this was a real thing. It was a live action time travel adventure show. The protagonist a witch called T-Bag and her sidekick T-Shirt. They seemed to be travelling from place to place collecting T-Spoons. I learnt most of my history from here. Clearly a big inspiration for Teacup Travels – although that’s a little more educational. It was a toss-up between this and the Pink Windmill, which felt like a drug induced show of Emu’s who was joined by a green witch called Grott Bags.

How I so wanted to go on Funhouse. Pat Sharpe with 80s mullet, the amazing electric cars that the twins would get ready for you. My first memory of shouting at the TV – “Go up stairs you idiots!”. The premise was you had to run about collecting various signs from a soft-play centre built in a TV studio. This was before soft-play centres existed, so you can understand the attraction. Clearly the Crystal Maze stole the idea and took it to the next level with more difficult puzzles and replacing Pat Sharpe with Richard O’Brien. “Put the key in the lock you idiot! Get the crystal!”

Thanks Jacob! Now is time to confess that I have no memory of Pink Windmill – not sure if that says more about me or my husband!

What was your favourite television show as a child? Did you grow up with SuperTed or the Teletubbies? Let me know!