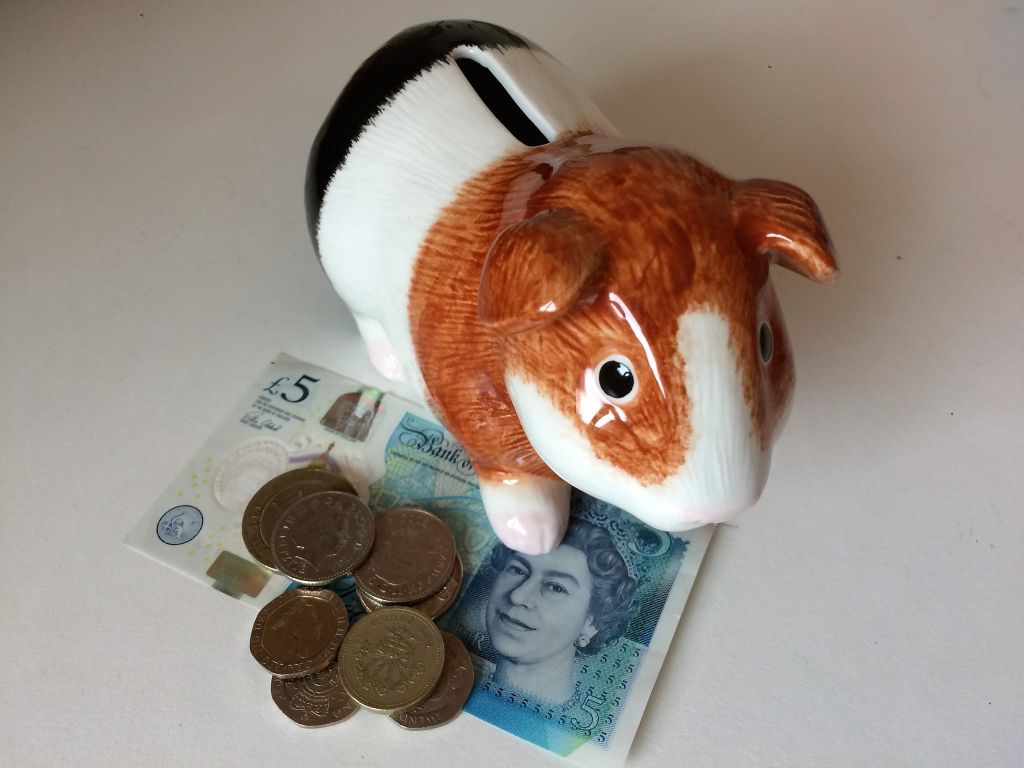 Last year our eldest son turned six, and it felt as though we entered a new gear of parenthood. Gone were the majority of the chunky plastic role play toys and ride on vehicles, in came the remote controlled cars, Nerf guns and superheroes. Picture books are slowly being replaced too (save for some very special ones) with the likes of Roald Dahl, J K Rowling, David Walliams and encyclopaedias.

Another change for us was a very keen interest from him in the value of things. Moving house (which I wrote about here and here) brought this into focus for him last year, but so too do the weekly grocery trips, swimming lessons and days out. With this in mind, we felt that it was time to introduce the concept of pocket money. Both earning it and saving it up for special things that he chooses.

When I was younger I think the going rate for pocket money was around 20 pence a week, with an opportunity to earn more through carrying out various chores such as the washing up or cleaning the car. Looking after my bicycle earnt me a pound on one occasion! I will always be grateful to my parents for introducing me to the value of money, especially with the element of earning a portion of it, and using it to save up for toys or books (or stationery!). I feel, however, that times have changed. It seems as though so many things are automated now that computers or specialists take care of some of the tasks that I used to enjoy learning about as a child. Take cars for example. When I was younger, if our family car broke down Dad would fix it and I would watch on. When I bought my first car, if it broke, I would fix it (within reason), watched over by my father. If our family car breaks now, we take it to the garage, it’s plugged in to a computer, some diagnostic checks are run and on occasion the program can sort it out there and then. It seems that things are handed to us rather more on a plate than they were, and consequently relying upon yourself doesn’t have quite the same focus for our boys. Anyway, I digress, but I saw pocket money as an opportunity to redress the balance a little.

So, our six year old earns pocket money, but not by doing chores. In my mind he should be putting his plate and bowl in the sink to be washed up, and dirty clothes need to be taken to the laundry basket, as part of everyday life and being an active member of our family. We all chip in as much as possible with achievable tasks, to encourage working together and appreciating what we do for each other. My mother would comment that it’s very “Montessori” of us!

Instead of chores he earns his pocket money by demonstrating his learning and motivating himself to try things out. For example, he read some information about how volcanoes are formed. He used this thought to consider the volcanoes that he had read about on Mars, and whether they are the same as those on Earth, especially Olympus Mons which is thought to have formed when the plates on Mars were not moving. He looked things up for himself, asking for support where required, and wrote what you might regard as a six year old version of an essay, along with hand drawn pictures. For this, he earnt himself pocket money. Creating a new circuit with his Snap Circuits and drawing how it is similar to a real electrical circuit earnt him more pocket money. And so on and so forth. We are very much guided by him, but reward him when he has worked hard and created a challenge for himself.

He can then save the money for something special, or choose to bring it with him when we next go to the supermarket to spend it on a toy car or a magazine. I hope that using this approach he will learn right from the start that spending can be fun, and so too can saving.

All parents and guardians will have different approaches to this, and I’m not saying that ours is a perfect one. I do hope though that as the boys grow it can be adapted to suit them all as individuals, and reflect and reward their own personal achievements. Naturally my intention is that this approach will create a positive relationship with money, and an understanding of saving and spending. I also hope though, that this method will lay the foundation for a good work ethic, diligence and even sharing of ideas and the joy of learning from each other.

I hope you’ve found this post useful and it might give you some pointers to use in your family too.