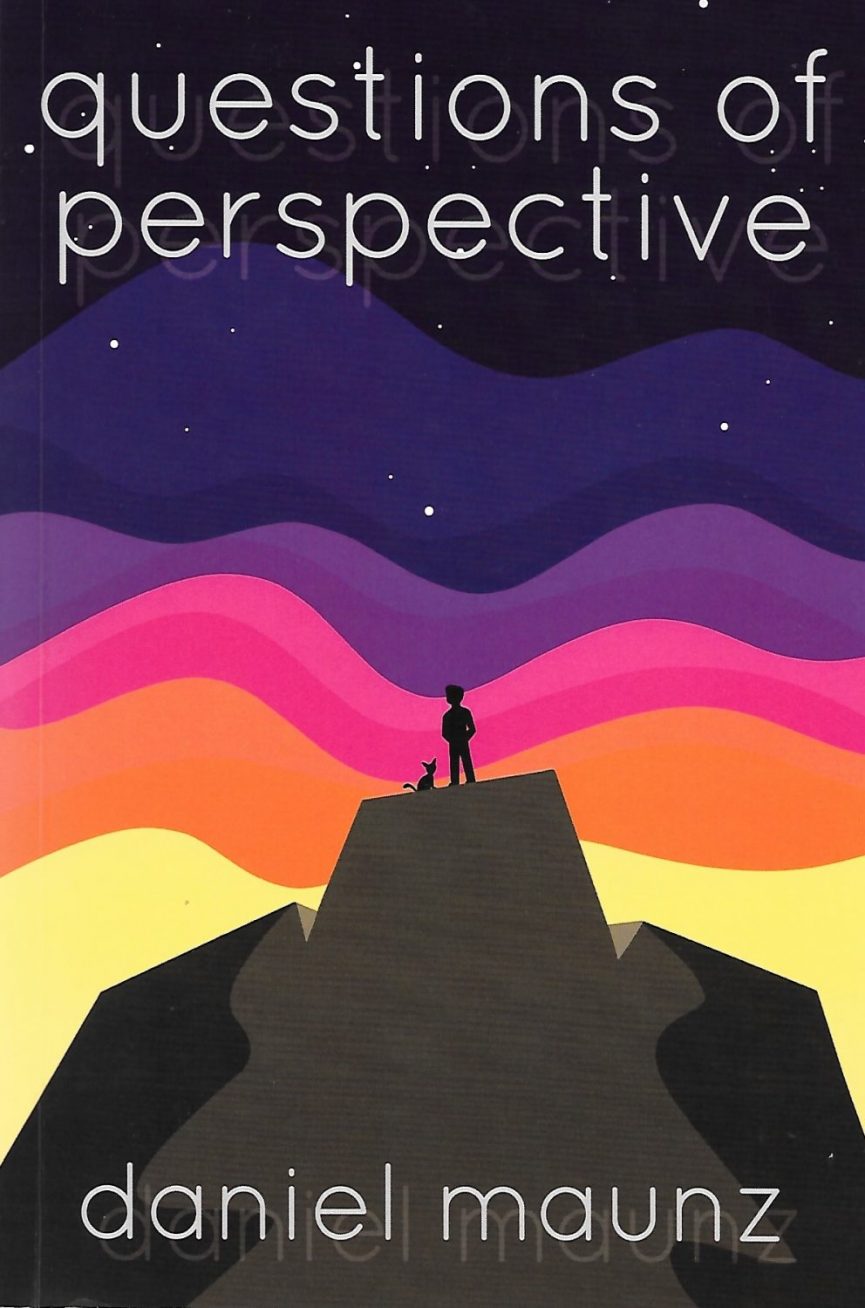 After his only friend and colleague, John Manta, disappears without a word, Dave Randall further entrenches himself in the humdrum life of an unenthusiastic lawyer. But once he begins to understand what happened, he embarks on a journey to uncover the deeper meanings and implications of John’s fate.

Accompanied by Peaches the cat, Dave uproots his life and reinvents himself in the midst of his search. Along the way, he is haunted by his piecemeal understanding of John’s fate and what it means for his existence. Little does Dave know, his journey of self-discovery will have ramifications that extend far beyond the borders of his own little life.”

Questions of Perspective is a fascinating read which centres on two characters, Dave and John, who work as attorneys for a legal firm specialising in insurance defence cases. It starts out when both are working at the firm. There is a familiarity to the office which comes through Maunz’s writing, it could be any office anywhere with internal politics and awkward social events. The characters feel real too. In these early chapters you feel as though you are reading autobiographical work, the depth of them draws you in and their situations are relatable.

When one of the characters, John, goes missing Dave is concerned, but with no trace continues his life and routine with his work. 12 months pass and somehow inexplicably and rather abruptly we are thrown into a different dimension of the novel: John has become God. Some of the details at this point felt a little forced and out of step with the character profiles that had been built up. Dave is portrayed as a fairly sensible man who doesn’t have large outgoings or a lively social life, but he slips easily into a new direction which involves him living on his savings for over a year and not seeming overly concerned about the depletion of his funds. His lack of family becomes more apparent too, which isn’t really addressed. Some of this element of the story feels too convenient.

Nonetheless, this side step into a philosophical novel is interesting, and instead of perhaps being immersed in the characters, you become aware of yourself. What choices would you make? If you had the chance to go back and change something in your life what would it be? What might the repercussions of such a change entail? I definitely felt a gentle push towards gratitude for my own good fortune and the story encourages a focus on what kindness we can show to ourselves as well as to others. This is done without a patronising or particularly religious tone though, quite an impressive feat given that one of the characters has become God.

We don’t learn why, or indeed what might happen long term to this character, but we are left with a slightly reassuring and comfortable feeling, if nothing else then from Dave’s observation that he will climb the same mountain as much as he can until there was nothing new on it to appreciate:

“…that trail for me represents a reminder to live life with eyes and ears opened and not take anything for granted.”

In conclusion, would I recommend this book? Absolutely. It is a good read and hopefully one that will leave you feeling mentally refreshed.

Purchase links for Questions of Perspective:

When he is not writing, Daniel Maunz works as an attorney as in-house counsel for a major insurance company. He currently lives in Sullivan’s Island, South Carolina, with his wife Lynne, their son Patrick, and their two cats: Admiral Meowy McWhiskers and Captain Cutie (or “Admiral” and “Captain” for short). Questions of Perspective is his first novel.

N.B. Thank you to Daniel Maunz for the copy of Questions of Perspective which was gifted for the purposes of this review, and to Rachel’s Random Resources for organising the blog book tour. For more details of my reviews please take a look at my disclosure page.