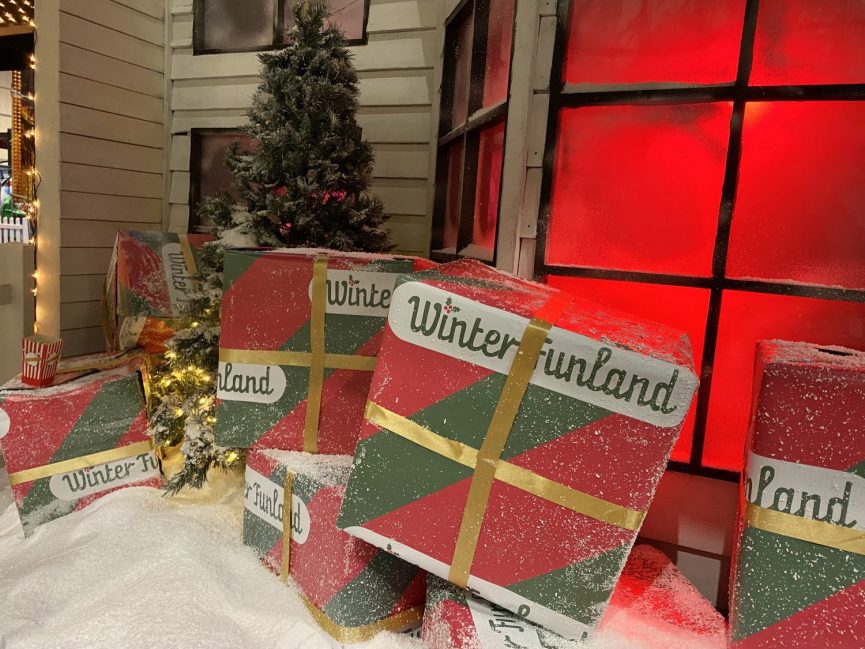 Aptly named, Winter Funland is best described as a large indoor funfair, with added extras. We were recently invited along to the Winter Funland at the NEC*. With energy levels lagging at the end of an extremely busy school term for us all, we hadn’t got much in the diary to bounce us in to the Christmas spirit. I wasn’t sure quite what to expect, but I was excited to accept the invitation and have some fun with my boys.

On arrival we were quickly ushered through the various checkpoints so there was no hanging around waiting in queues. The event was prebooked, which meant that numbers were carefully managed, and there was plenty of space and distancing throughout the venue. The staff were really helpful at managing the flow of people on and off rides too.

The rides were what you might expect from any other funfair, the difference being that there were lots of them. The visiting time slots are 4 hours long, and we didn’t get to go on them all which gives you an idea of how many there are to choose from! They range from small teacup style rides and trains, to intermediate rollercoasters and a ghost train. There are two funhouses, and large inflatables to play on.

Along with the rides is circus entertainment. We chose to go to the first performance of the day (hoping to fit in with having lunch afterwards – which I’ll come to shortly). The show was very nice. Not as spectacular as some we’ve seen but certainly entertaining and the various acts showcased a range of talent from singing to juggling to motorbike riding. The gymnasts particularly stood out to us.

There is also an ice rink which we didn’t try out as none of us are skaters and the idea of towing the boys around myself didn’t appeal. It did look like fun though and was a really nice activity to add in.

Afterwards we hoped to have some lunch, and this is where we saw one particular downside to the event. There are three food stalls at Winter Funland and across these stalls there are two vegetarian options: cheesy chips or skin on fries. The latter of those is vegan too. I feel that for a family event which states that you must not take your own food and drink, the options were poor.

Something else you might want to consider is the price. A family ticket (2 adults, 2 children or 1 adult, 3 children) is £89 + booking fee. Broken down, the total amounts to around £23 each. When you think about the number of rides it is actually reasonable. Our local fair in town costs around £3 per ride, so once you have had 7 + rides your spend will be approximately equal (not to mention the circus and ice skating). The key difference though, is that at a funfair in town you can budget to a lower total spend if needed. So whilst I do think that the ticket price represents good value for money, I wonder how many families might be able to afford it this season.

That said, in all we had a very nice day. The boys were exhausted afterwards from the running around, especially on the inflatables which they loved. I appreciated that being an indoor event I wasn’t left freezing whilst watching them either! There was definitely plenty to do and it did leave us feeling more festive than we were when we arrived.

*N.B. We were gifted tickets to the Winter Funland in exchange for my honest opinion. As ever, all thoughts are my own. For more information, please take a look at my disclosure page.