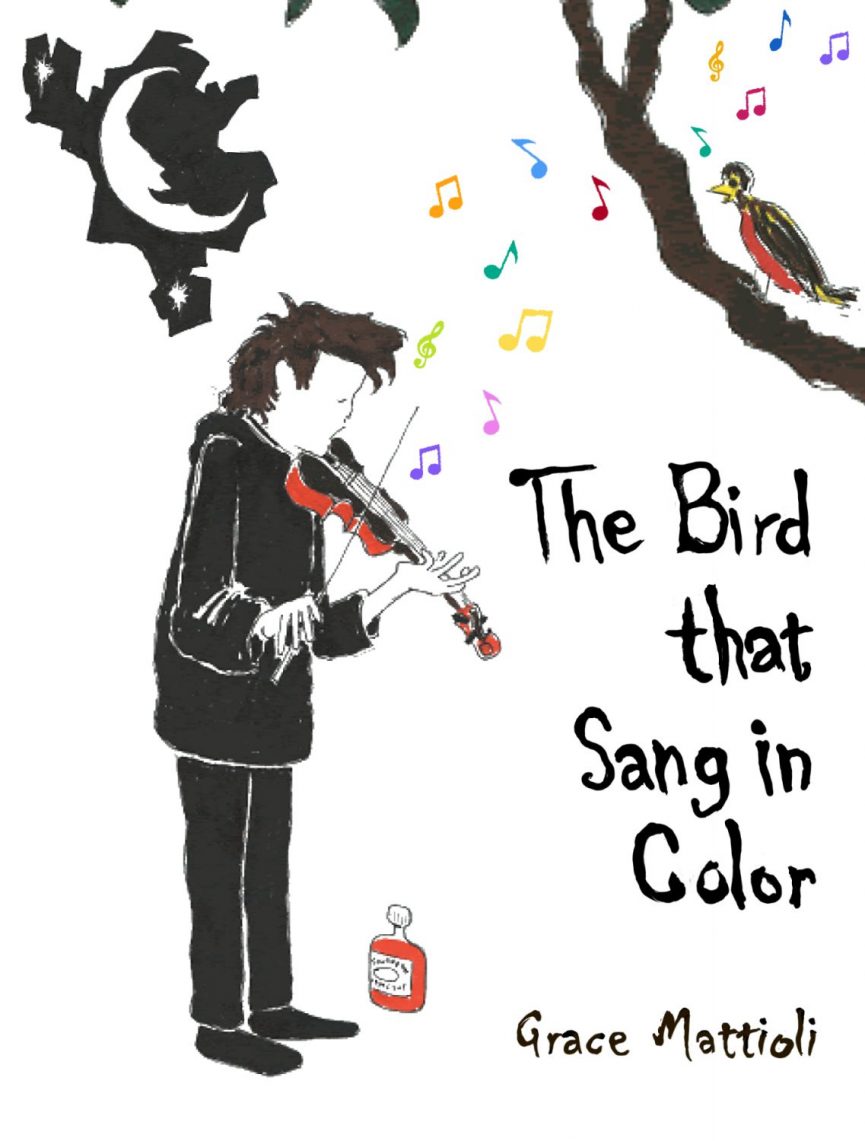 I’m delighted to share a brand new book with you today, so new that today is also publication day!

Before I go any further, huge congratulations to author Grace Mattioli on the release of her novel The Bird that Sang in Color.

I have very kindly been gifted an electronic copy of the book, but as I was rather late to jump on the tour bus I am bringing you an excerpt to read and a chance to win a copy of the book today, instead of a review.

The Bird that Sang in Color

Part family drama and part self-actualization story, this is about Donna Greco, who in her teens, subscribes to a conventional view of success in life and pushes her freewheeling, artistic brother, Vincent to do the same. However, he remains single, childless, and subsists in cramped apartments. She harbors guilt for her supposed failure to ensure his happiness until she discovers a book of sketches he made of his life, which allows her to see his internal joy and prompts her own journey of living authentically.

Thought-provoking, humorous, and filled with unforgettable characters, this book invites readers to ponder what pictures they will have of themselves by the end of their lives.

“A refreshing family portrait about interpersonal evolution…presented with affection, humor, and insight…an inspiring slice of life blend of philosophy, psychology, and transformation that draws readers into a warm story and examines the wellsprings of creative force and future legacies…evocative, uplifting,” Midwest Book Review.

Excerpt from the book:

Some of his paintings were abstract, my favorite being one that looked like a kaleidoscope with no beginning and no end and colors that bounced off the canvas like a beautiful neon sign sparkling against a black sky. I could stare at it all day. I went between staring at it and the album cover before me—Let It Be by the Beatles. Vincent sat by the record player, dressed in his usual Levi’s, T-shirt, and Converse high-tops, bent towards the revolving album, listening intently, his head of black curly hair moving back and forth, his right foot tapping the hardwood floor, keeping rhythm to the Fab Four.

Finally, he turned his head away from the stereo and said to me, “I can’t believe this is it.” His face was serious and gloomy, and I didn’t know what he was talking about, but I pretended that I did because I’d never let my cool down around Vincent. It was because of him that I knew so much about rock and roll, which made me pretty sure that I was the coolest eighth-grade girl in the whole town and possibly in the whole state of New Jersey.

“I know,” I said seriously.

“I mean, I just never thought the Beatles would break up.” He shook his head with disappointment.

“So, this is their last album, then?”

“Well, yeah,” he said, like I should have known better.

“Hey, check this out, Donna.” With the speed of a light switch flicking on, he turned into an entirely different person, no longer sad and gloomy but light and happy. He showed me a drawing he made of an old lady sitting on a chair with half of her body missing, and it looked as if the missing half was on the other side of an invisible door. She wore a mysterious smile as if she knew some extraordinary truth.

“Where’s the other half of her body?” I said.

“Wow.” I sat there, trying to wrap my head around this while listening to the song playing. Just as I was about to figure something out about the picture, and just as I was really getting into the song, he took the needle off, turned the album over, and put the needle on the first song on the other side, a tendency he had that bothered the hell out of our brother, Carmen.

He scratched his head and looked up, his eyes penetrating the ceiling, deep in thought. He resembled Mom with his olive skin, Roman nose, and black curls, and was the only one of us who got her curly hair. The rest of us had straight hair. Mine was super long—to the bottom of my back—and I wore it parted in the middle and was certain that I was wearing it that way long before it was the style.

Vincent was also taller than the rest of us at over six feet. Dad said he took after his own dad in stature. I never knew Grandpa Tucci because he died before I was born, but I was told he was called Lanky because he was tall and skinny. I was pretty thin myself and had a bottomless pit. People would say that all my eating would catch up with me one day, but that never stopped me from eating ice cream every day after school. Breyers butter almond was my favorite.

Vincent listened to the music with pure attention, like there was nothing else in the world as George sang I, me, mine, I, me, mine, I, me, mine. He was probably trying to figure out what the song was about or how he could play it on his guitar. His acoustic guitar sat in the corner of his room. He had the smallest room in the house, but it seemed like the biggest because it was its own self-contained universe. I felt like I could be on the other side of the world without ever leaving his room.

Find The Bird that Sang in Color on Goodreads.

Grace Mattioli is the author of two novels, Olive Branches Don’t Grow on Trees and Discovery of an Eagle, and a book of short stories, The Brightness Index. All titles have received stellar reviews from sources such as Midwest Book Review, Kirkus Reviews, and Indie Reader Reviews, and Olive Branches Don’t Grow on Trees has been on the prestigious “Best of” list in Suspense Magazine. Grace lives in Portland, Oregon with her husband and her cats. She’s worked as a librarian for over 20 years and has been writing creatively since she was a child.

Find out more about Grace on her website or social media:

International Giveaway: Copy of the book in any format (Print, Digital, Audio)

Giveaway runs from January 17th to the 20th

N.B. Thank you to Shannon of R&R Book Tours for arranging the excerpt to share with you all, and the giveaway. Also huge thanks to Grace Mattioli for the electronic version of her book The Bird that Sang in Color. For more information on how I work with others, please take a look at my disclosure page.