When I was growing up I had a great interest in medieval Britain, in particular the Tudor era of rule. When I was thinking about this brilliant time traveller series I was initially very tempted to resurrect those memories from childhood! But thinking about it further, there’s actually one era that’s more modern that I would love to travel back to.

Rarely do we get a chance to see such massive change in action – all at once. I imagine it would have been an amazing era where anything felt possible. The music of the day like ‘Blowin in the wind’ and ‘Good vibrations’ reflect not just the quality of the music but the great feeling of possibilities ahead.

Sometimes when I read the news and check social media these days, it can all feel a little depressing, especially where bringing up our kids are concerned.

In the 1960’s I’d imagine parents would have no worries about e-safety, or the future jobs of our children, but on setting them up with limitless opportunity. Of course, that’s actually still an important thing we need to inspire in our children now – but the key difference with the 1960’s is probably how progressive society felt as a whole!

In an era of tablets, phones, and rich kids of Instagram, another reason I’d love to travel back to the 60’s is a true appreciation of the little things. Whether that’s more time spent outside or better crafts with kids, really being present with each other, the children and ourselves is a mindset I admire, and one in the 1960s I’d imagine was rife, in a good way.

In a lot of ways one of the great challenges of our world today is the lack of people really making things. It’s something that robots can’t just invent, and the 1960’s was a time was great invention. The cassette tape, the weather satellite, the computer mouse, the LED, the smoke detector, the super ball, Star Trek (the original series!), the first 911 call, the first time man landed on the moon. The 60’s was a time of great invention and achievement.

Thank you for sharing your thoughts Han-Son. It would be lovely to go back to an era free from the internet and mobile phones.

Han-Son runs DaddiLife – a parenting website for dads, covering a range of tips, stories and advice across health, family, things to do and lifestyle for fathers. To read more, head over to his website or follow him on social media: 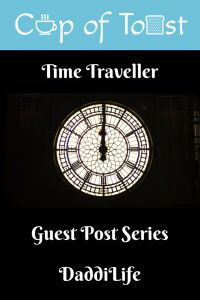