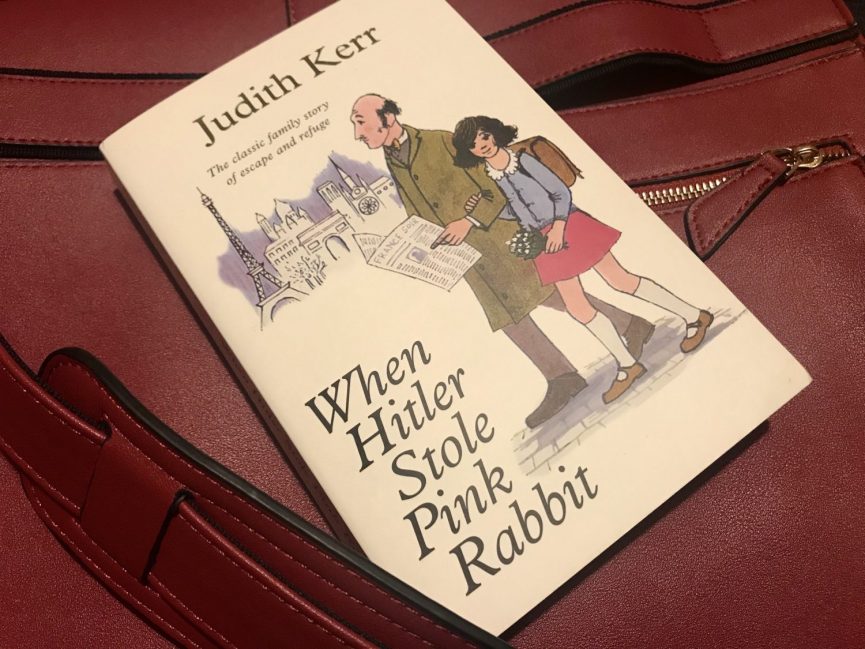 “Suppose your country began to change. Suppose that without your noticing, it became dangerous for some people to live in it any longer. Suppose you found, to your surprise, that your own father was one of these people. That is what happened to Anna, in Germany in 1933.

Anna is too busy with schoolwork and tobogganing to listen to the talk of Hitler. But one day she and her brother are rushed out of Germany in alarming secrecy, away from everything they know. Their father is wanted by the Nazis – dead or alive. This is the start of a huge adventure, sometimes frightening, very often funny, and always, always exciting.”

Perhaps best known for her picture books, The Tiger Who Came To Tea and the Mog series of books, Judith Kerr needs no introduction. Born in Berlin, Germany, in 1923, Kerr and her family fled the country days before Hitler came to power in 1933. Moving first to Switzerland, then to France and finally to England in 1936, When Hitler Stole Pink Rabbit charts their travels and how they adjusted to life in both Switzerland and France. Before leaving Germany the family packed some essentials that they could travel easily with. Kerr recalls:

“Should she choose Pink Rabbit which had been her companion ever since she could remember, or a newly acquired woolly dog? It seemed a pity to leave the dog when she had hardly had time to play with it…”.

The other belongings were due to stay or follow at a later date, but Kerr discovered that shortly after her family had left Germany the Nazis confiscated the property that they had left behind:

“The piano was gone … the dining-room curtains with the flowers … her bed … all her toys which included her stuffed Pink Rabbit. For a moment she felt terribly sad about Pink Rabbit. It had had embroidered black eyes – the original glass ones had fallen out years before – and an endearing habit of collapsing on its paws. Its fur, though no longer very pink, had been soft and familiar. How could she ever have chosen to pack that characterless woolly dog in its stead? It had been a terrible mistake, and now she would never be able to put it right.”

Kerr mentions in her author’s note that she chose to write the story using one of her other names, Anna, as she felt that she had changed so much from “the little girl who fled from the Nazis”. Nevertheless, this is an autobiographical story, told with the light naivety of a young girl, but touching on the worries of her parents and the very difficult but necessary decisions that they had to make for the sake of their family’s safety.

Talking to Emily Maitlis on BBC Newsnight in 2015, Kerr said:

“My parents were very protective… I never really understood how awful it was for them.”

When questioned if she viewed the book as being dark she said no:

“I didn’t think of it as being dark… I loved it, I loved being in Switzerland, especially in Paris, and then coming here. I was talking to Tom about writing this book and he said it can’t just be about your happy childhood, Hitler’s got to be on the first page. I got him on the second page.”

Suitable for children aged around 9 or 10, to adults, I barely put this book down. It is not only engaging but also of historical interest, bringing to life through her words the difficulties faced but also the small triumphs that some refugees had.

In 2004 Kerr was interviewed for Desert Island Discs, and told Sue Lawley:

“I think of the business of the Holocaust, and the one and a half million children who didn’t get out as I got out, in the nick of time. I think about them almost every day now, because I’ve had such a happy and fulfilled life and they’d have given anything to have had just a few days of it… I hope I’ve not wasted any of it. I try to get the good of every bit of it because I know they would have done if they’d had the chance.”

If you haven’t read When Hitler Stole Pink Rabbit, I would highly recommend it. If you have? It’s a good one to read again.

If you enjoyed this book, you may also like Gorgito’s Ice Rink, a fictional tale by Elizabeth Ducie. Read more here.